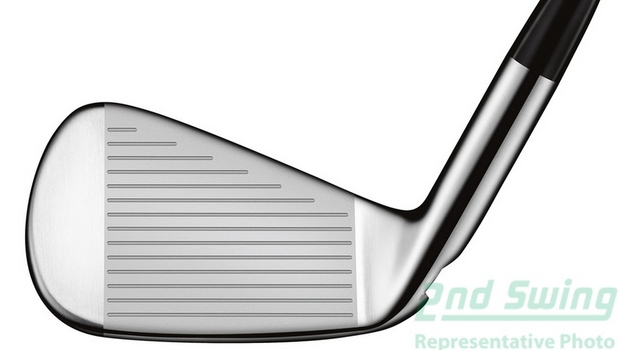 For 2014, TaylorMade has done it again.  Taking advantage of its new Speed Pocket technology for woods and irons, the company has created a set of irons for the better player.  TaylorMade has cast set irons from 3 to 7 for performance and forged irons from 8 and up for a better feel as you approach the green.

You get the feeling that TaylorMade was really setting out to identify a particular level of golfer.  A high single digit to say, a 12 handicap golfer.  This golfer hits their irons well enough, but struggles with consistency with the lower clubs. But, this golfer still prefers the feel needed when closer to the green.

The 7-iron has a clean look with an opening for the slot.  I found it appealing to look at, and it has a progressively more minimal offset as you move to the 8- and 9-iron and pitching wedge.

From the top, you can notice that the sole is not overly large for a cast iron and has a Speed Pocket.  I found the clubhead size to be easy on my eyes.  I tend to not like working with larger clubheads (feels and looks like a hockey stick).

The forged irons in the set have almost no offset, clean lines and give me confidence I’m going to hit a shot into the green and have success.

The 2014 Tour Preferred MC irons come with KBS Tour shafts as their standard offering.  Now, normally, I’m a huge fan of the KBS shaft and all the other shafts they have to offer (You will find I have a deep-seeded dislike for all things that say Dynamic Gold, so be fore-warned.).

But for some reason, I did not receive good feedback when hitting the TaylorMade Tour Preferred MC 7-iron.  I made a dozen swings and the club felt clunky, heavy and my ball flight was mixed at the 2nd Swing Golf Minnetonka store.  Thinking it was more me than the club, the next day I ventured to the Minneapolis 2nd Swing and tried the 7-iron with the standard KBS shaft again.  Much better results.  Good ball flight, a nice click off the clubface and distance that typically falls within the averages of where I hit a 7-iron.

Being a tinkerer, I had the fitters put on the new Rifle Project X 95g shaft.  The results were improved feel and ball flight, plus I gained a few yards in average distance.  So, make sure you have the fitters allow you to try different shafts.

It is difficult to accurately gauge how well the irons performed in the simulators.  I needed to tweak the type of shaft I was using, use a clubhead that provided me with an upright lie — and truth be told — I should probably use a shaft about a 1/4 inch shorter than standard for my best results.

One more important factor to consider:  TaylorMade irons over the years have been very inconsistent with its swing weights from iron to iron.  I found this to be true with the demo club I was using.

TaylorMade lists the swing weight spec of its standard 7-iron to be a D2.  The iron I was using weighed out to a D1.  You’ll find many PGA players using TaylorMade irons that have multiple strips of lead tape on some irons and then none on others, so be aware.  (NOTE:  This can occur with all club making manufacturers, not just TaylorMade. ) But, it is important to have a set of irons with a matched set of swing weights since this will greatly affect your day-to-day play.  I have been a victim of this, so I know.

This is where you should be taking advantage of the fitters at 2nd Swing Golf.  If you plan to be spending money on a new set of irons, then you need to be properly fitted.  You want to find the proper swing weight you want and make sure that the custom order you place has all the irons weighted correctly when they arrive.  The 2nd Swing staff can assist with testing your clubs when they arrive.

While I like the concept of the mixed set, the jury is still out on the 2014 version of the Tour Preferred MC Irons from TaylorMade.

The clubface design is nice, small but not too small, progressively minimal offset and the club sets up well.  As a buyer, you’ll want to make sure you are fitted with the correct shaft.  What are the odds that you will be able to purchase off the rack, and it will be exactly to your specifications?

PING Tour News: March 17, 2014
Golf Stretches and Practice To Help You Start the Season Off Right