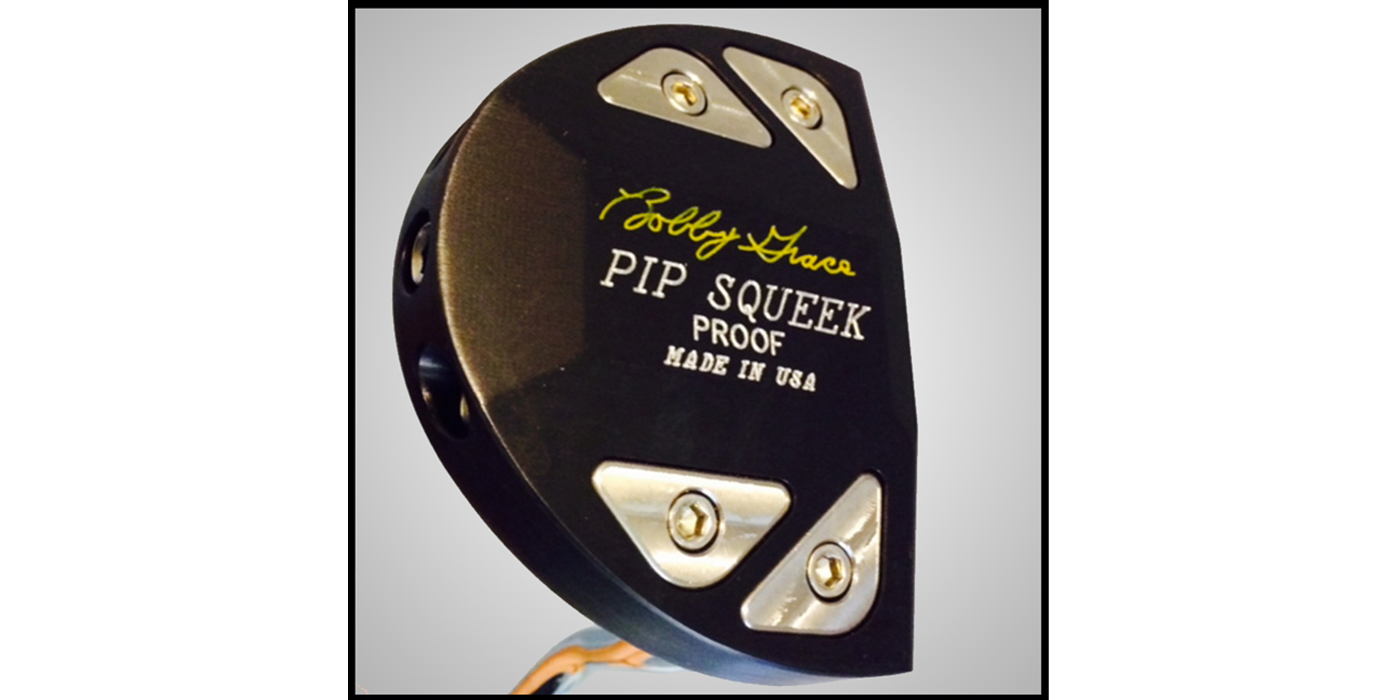 Bobby Grace Putters are ranked among the best putters made with a solid reputation. Grace is a self-made innovator and tinkerer who is known for introducing such game-changing design breakthroughs as high moment of inertia (MOI) mallet putters. Other new Bobby Grace Putters technologies include his “Golf Ball” core inserts and “Tri-Plane” sole design.

And the Bobby Grace Pip Squeek Putter is his 2014 breakout design.

The Bobby Grace Pip Squeek Putter is a compact mallet made in America. Though small, its HSM2 insert is for maximum forgiveness on off-center hits and a pure roll-off face. (The tech is a patented multi-rebound Hole Seeking Material (HSM) that adds a lot to the face’s radius.). The trademarked Tri-Plane sole is supposed to produce less drag, which makes putting from the fringe easier. The Bobby Grace Pip Squeek Putter features sight lines, too.

Each Bobby Grace Pip Squeek Putter is machined in the company’s Tour Shop from aircraft-grade 6061 aluminum with strategic weights (355 to 410 grams), which makes it available for back weighting.

Each new putter can be made special order, including shaft length or right- or left-handed.

“Bobby Grace Tour Putters is a tried and true product with a long line of enthusiastic and satisfied customers – including the most elite players in golf,” according to the man himself, who is not shy of promoting the clubs and company he built.

Here are some other Bobby Grace Pop Squeek Putter facts, according to the company:

Bobby Grace Putters started with Grace collecting classic putters and selling them around the world. By the early 1990s, as his business flourished, he decided to incorporate that classic style with new technology.

Soon, he was with the help of a team, Grace was manufacturing “limited edition” putters as part of his Bobby Grace Classic Club business.

His company’s big break came in 1994. Nick Price, who was about to become the No. 1 ranked player in the world became enamored Grace’s “The Fat Lady Swings” putter. In fact, Price won the 1994 PGA Championship with a Fat Lady putter — and Grace soon had more than 27,000 orders. It was his big break.

In 1997, Bobby Grace Putters was purchased by COBRA Golf. In 1999, Grace moved on to start another putter company, which MacGregor Golf bought in 2003. In 2009, Grace bought back all of his patents and name copyrights name to start again as Bobby Grace Tour Putters.