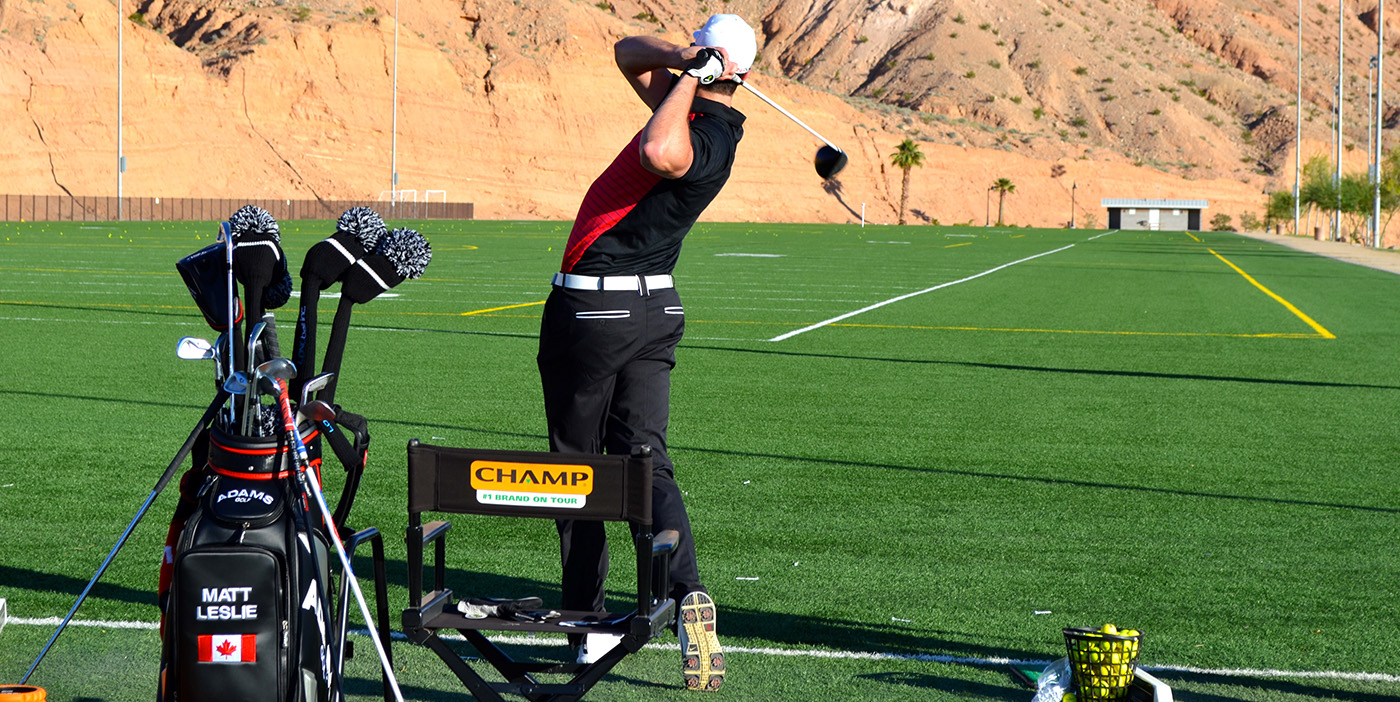 Who am I? Teddy VanRanst of Minnesota. Why Long Drive? ‘Cause everyone wants to hit a golf ball fast and far — and for money.

It seems that as humans, we are a very competitive species. The main outlet for us to be competitive and to establish dominance is through sport. Case in point, Long Drive Competitions.

In 1995, the Long Drivers of America (LDA) took control of the World Long Drive Championship, which had been held every year since 1976, and had Re/max latch on as the title sponsor. Giving us what we have today, the RE/MAX World Long Drive Championships, held every year in Mesquite, Nev. The final eight hitters get the privilege to hit at the Las Vegas Motor Speedway for a shot at $250,000.

Ryan Winther, the 2012 RE/MAX World Long Drive Champion describes it best: “It’s like an addiction. It’s the best feeling hitting a 400-yard drive. Once you do it, you’re hooked.”

Growing up, I always had an aggressive swing. I grew up hitting a lot and usually moved up onto teams a few years older than myself to play and develop my talents with older kids. All the while, never really paying attention to golf or being interested in playing it. Fast forward a few years and I’m playing college baseball for The University of Saint Mary’s Cardinals in Winona, Minn.

After a fall baseball practice, myself and a couple teammates went to the local golf course, for a little driving range session. Having gone multiple times in high school and college, I still only had one club. A driver.

While some people find this as the most incredibly frustrating club in their bag, I fell in love with it. As my friends would concentrate on keeping it in the fairway consistently and worrying about their distance secondly, I was the opposite. I was never concerned about the fairway.

I mean, I obviously wanted to hit it straight, but distance was — and still is — my top priority. My friend John Henderson put a bug in my ear to maybe try a long drive event. Having seen it on television many times and loving to watch the guys swing, I wondered if I could compete with guys almost a foot taller than me and as much as sixty to seventy pounds more than me.

I remembered watching Jamie Sadlowski (Pictured above.), a two-time RE/MAX Long Drive Champion and thinking, “He’s not that big.” In fact, he’s 5-feet 11-inches and weighs 175 pounds, a far cry from the usual competitor build, such as Joe Miller (Pictured below.), who is 6-feet 4-inches and approximately 280 pounds of solid muscle.

That’s the great thing about this sport, and I emphasize it as a “sport,” is that anyone can do it.

While, yes, being in shape does help, many different shapes and sizes of people compete regularly. From Sadlowski to Miller, to those falling in the different divisions of Senior (45-plus years old), Super Senior (50-plus), Grand Champion (55-plus), Legends (60-plus), Masters (65-plus), Ladies — and even international — truly anyone can compete.

People coming together from all different walks of life to duke it out for the title of golf’s longest driver. What’s not to love about it?

Ultimately, I decided to give it a shot. I was finished playing baseball competitively in the spring of 2013 and needed something to keep my competitive drive alive.

After training for a year, I finally competed, won, lost — and learned a lot.

Ball speeds more than 200 mph, swing speeds at 145 mph and greater, drives flying 400 yards, and a big check waiting with potentially your name on it. Who wouldn’t want to give this a shot?

My name is Teddy VanRanst, and I am a competitive Long Driver.