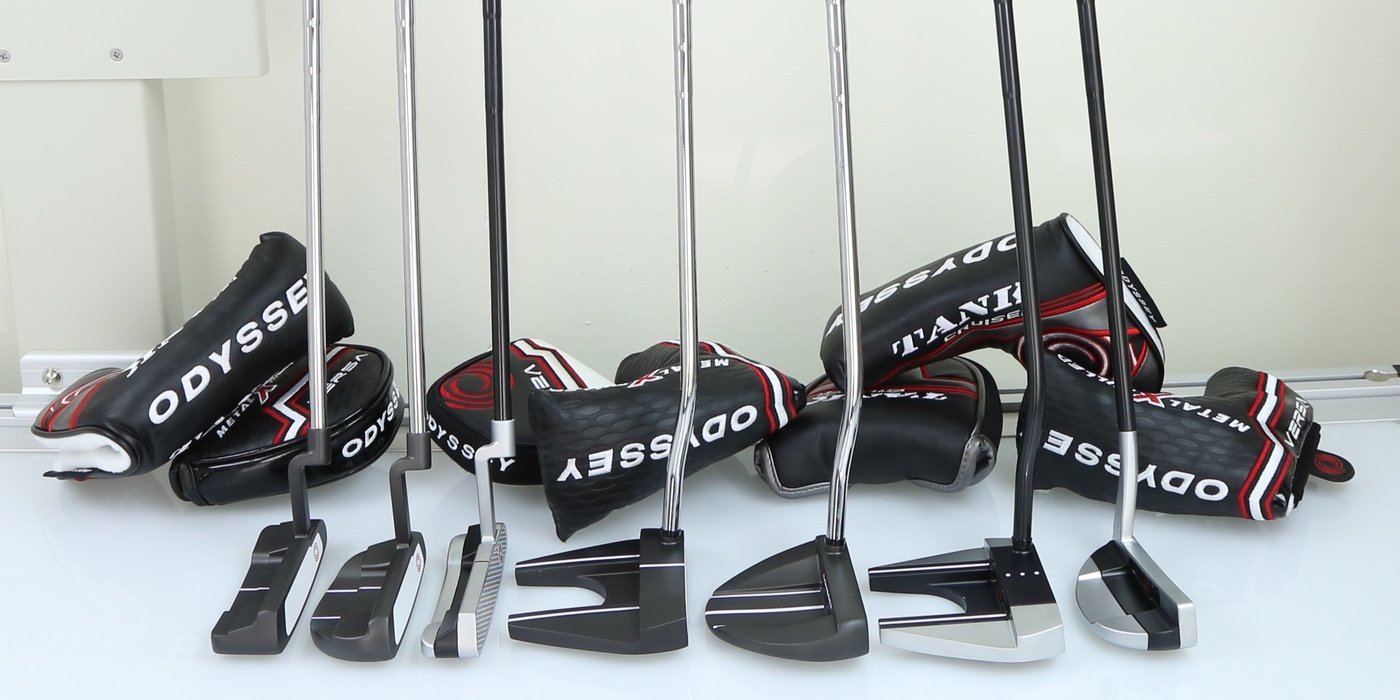 I’m digging trying out the new Odyssey Tank Cruiser putters for 2014. For many years, I was cutting down my putters (a’ la Lefty) and then having to put weight into the head to make up for the sometimes 3 to 4 inches I cut off.

I kept getting told that I was not able to create and sustain a repeatable putting stroke. Okay, okay… some of you were right.

It got to the point where I was considering going to a longer putter. But the USGA, in its infinite wisdom (tongue firmly in cheek), decided that long putters offered too much of an advantage to a minority of golfers. Club manufacturers responded by quickly beginning to experiment and search for new putter types.

I’m loving that Odyssey took it to the next level with its 2014 Tank Cruiser putter line.

The new catchphrase is now “counter-balanced” putters. These are built to offer the same features of longer putters but in a short enough length to avoid the “no-anchoring” ruling about to be enforced by the powers that be. And with that all in mind, the Odyssey Tank Cruiser line of putters made quite an impression at the PGA Merchandise Show earlier this year in Orlando, Fla.

But now for the fun part. Honestly, the 2014 Odyssey Tank Cruiser Putters themselves look like the typical Odyssey lines that have been around for an number of years. So what makes this particular line so interesting and intriguing?

First off, they have adjustable weights (10, 15, and 20 grams) for the heel and toe of the putter and counterweights (5,15, and 30 grams) for the top of the grip. Golfers can now adjust the weight and feel of their putter to their liking. Cool.

The standard lie for all models is 70 degrees, and the standard loft is 3 degrees. I recently added a mid-length SuperStroke grip to my own putter, at 35 inches long, so I could choke down on the putter and maintain a proper grip but also the correct balance I was missing when I cut down my older putters.

The 2014 Odyssey Tank Cruiser Putter line also comes with the mid-length SuperStroke grip and in lengths of 35 and 38 inches. So, I’m loving that I was on the right track; and Odyssey took it to the next level.

The Odysseys use SuperStroke counter-balance, non-tapered and cushioned grips.

The four models of the Odyssey Tank Cruiser line are the #7 (which we will review separately later since it’s expected to be a big seller), #1 Wide, the 330 Model, and the V-Line.

The #1 Wide is a blade-style putter with offset head, while the 330M and V-Line are mid-sized mallet heads.

The 330M also comes with an offset head, while the V-Line has a double-bend shaft. All of them come with the White Hot insert. The White Hot was chosen because of the feedback provided by the PGA Tour players who stated this insert had the best feel.

The color of the putters is a muted dark gray. The #1 Odyssey Tank Cruiser has a single line for alignment with the ball, the 330M uses dual alignment while the V-Line uses what Odyssey calls a Hi-Def alignment. Joe Golfer would say it is a three-line alignment, one for the middle of the golf ball and the outer lines match the width of the golf ball.

The White Hot insert is still soft and gives me very good feedback on well-hit putts. The weights in the clubhead — matched with the counterweights at the top of the putting grip — allowed me to make easy putting strokes. An easier stroke allows me to not put so much pressure on myself.

My grip is more relaxed and gives me more confidence. I like how the ball rolls to the hole. I found all the heads to be very stable at impact, even the #1 Odyssey Tank Cruiser blade model.

While I’m not the biggest fan of the putter heads that Odyssey chose to launch with its Tank Cruiser line, all right, except I do like the #7 (But, again, we’re not talking about that one here.), because it is offered in a left-handed model (so is the #1).

I want to say that I am a huge fan of adjustable weights in the heads and grips. The longer grip allows me to choke down to the length I prefer, and I do not lose the balance factor I gave up when cutting down my old putters.

The 2014 Odyssey Tank Cruiser Putter line will do very well as more golfers learn about the changing product scene and how it allows them to be more consistent, therefore better, putters.