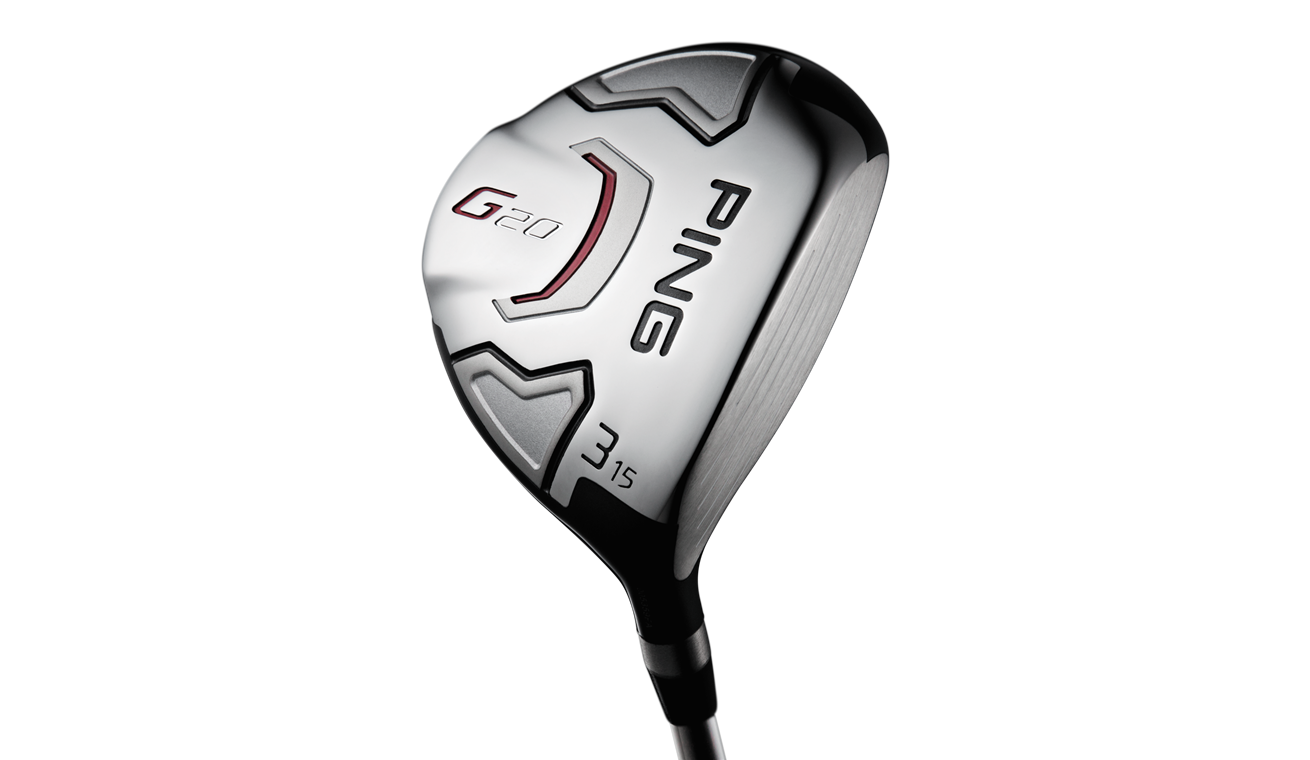 The Ping G20 lineup was very successful and my personal favorite is the G20 fairway wood.  Similar to the other members of the G20 line, the fairway wood was also named to Golf Digest’s Gold List.

The Ping G20 fairway wood is designed with a 17-4 stainless steel club head.  The center of gravity is positioned low and deep to create a high launch.  Ping used perimeter weighting for a higher MOI and improved accuracy.  The Ping G20 maintains a D1 swing weight.  A simple design and concept lead to solid results and an 8 out of 10 ranking in technology.

A look at the shallow face on the G20 fairway woods.

The Ping G20 features a 165cc club head with a shallow face.  Compared to many other companies, the Ping G20 fairway wood appears “boring” with a dark gray color scheme.  However, Ping delivered a product with more substance rather than style.  Overall, the club sets up very nice at address and uses a crescent alignment aid similar to the G20 driver.  The design of the club head looks great and easy to hit.  Overall, I am a big fan of the simple appearance and rate G20 fairway 9 out of 10.

I tested the Ping G20 15 degree 3 wood with a stock TFC 169F shaft in stiff flex.  The shallow face of the G20 helps launch the ball from a tight fairway lie.  In addition, the G20 creates a mid to high ball flight which is important for a consistent and reliable carry distance.  Similar to the K15, the G20 is extremely forgiving and produces straight shots.  In fact, the K15 was probably the straightest fairway wood Ping produced with little workability.  The G20 is not as straight but provides a little more pop than the K15.  The G20 still allows you to work the ball and off center hits do not result in a significant loss of distance or accuracy.  Shots feel extremely solid at impact with a dull “ping” sound.  The G20 fairway is a nice addition and actually outperformed the Ping i15 in my individual testing.  Performance with the Ping G20 rates 9 out of 10.

The Ping G20 produces straight shots with a high launch and low spin.  In my opinion, the G20 performs similar to the K15 fairway woods with a better ball flight and distance for lower handicap players.  The G20 is extremely forgiving and easy to hit.  While many competitors offered adjustable clubs, the G20 fairway features a glued head that outperforms much of the competition.  The Ping G20 was a bargain at the original retail price of $199.99, and should be a steal at the reduced prices.  Overall, the G20 fairway performs fantastic and rates 9 out of 10.