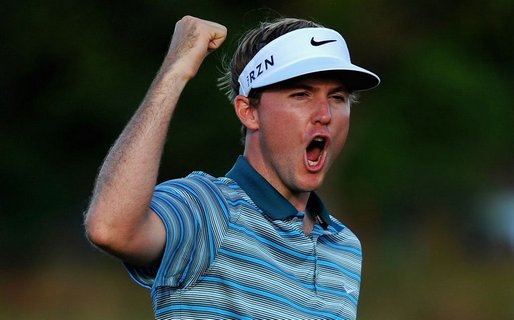 Rory McIlroy blew The Honda Classic Sunday final in Florida, or Russell Henley redeemed himself and just took for himself his second PGA Tour win.

Either way, Henley, who’s struggled this year to make cuts, walked off the the Champion Course at PGA National Resort & Spa with more than $1 million.

And McIlroy and his fans were left to dwell on how McIlroy, who like Henley also is 24, missed out on his first win of the 2014 season after leading The Honda Classic wire-to-wire.

McIlroy may have been saying the same to himself.

He put himself in position for a four-man playoff, with Henley, Ryan Palmer and Russell Knox after a double bogey, bogey and missed 12-foot eagle putt at the end of his final round.

Clearly, Henley appeared anxious as McIlroy’s putt slid to the right for a miss on 18th. However, the nerves apparently didn’t carry over.

In a playoff marked by high winds that held out all day, Henley took advantage of his own second chance on the par-5, 549-yard 18th. Previously, Henley struggled just to make par.

In the playoff, Henley killed his drive and cleared the bunker, making it to the green in two. There, he set himself up to drain a two-putt birdie.

Meanwhile, McIlroy, Palmer and Knox only could manage to make par.

“It’s going to be hard to get over because I had a great chance to win my first tournament of the season and I didn’t,” McIlroy told pga.com.

He said he “just didn’t play well today.” McIlroy also told reporters he wouldn’t have deserved to win with a 74 on a Sunday.

McIlroy also seem undeterred, even if it was his second similar loss of the young season. He also lost a two-stroke lead last month Dubai Desert Classic. He said he was already looking forward to the next weekend’s WGC-Cadillac Championship at Trump National Doral, also in Florida.

Actually, no one played great Sunday, making some observers question if anyone truly wanted to win.

McIlroy started Sunday with a two-shot lead over Henley, but wound up four over. That’s after having rounds of 63-66-69.

Henley hit a 72 and Knox was only one shot behind him. Palmer stood out by being the only member of the final foursome to shoot under par with a 69.

As for Tiger Woods, he was in the hunt at five-under par 65 Saturday before leaving the course the next day after 13 holes with back spasms.

Keys to Improving Pace of Play
So, what is a club fitting exactly?