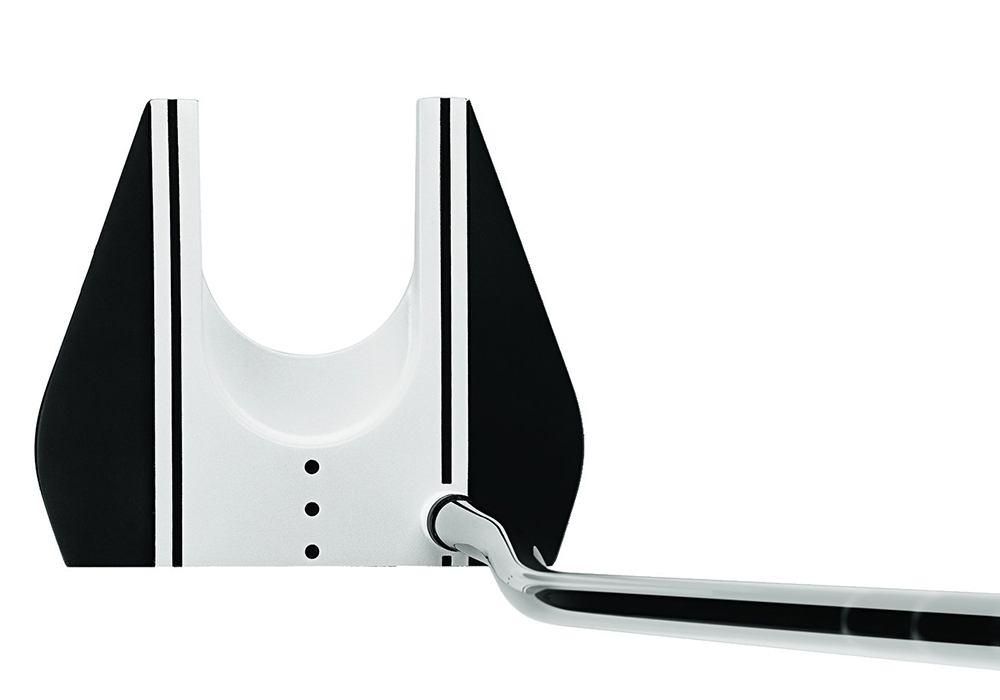 The Odyssey Tank #7 Versa Black Putter is the company’s newest attempt at creating an alternative to the anchoring ban coming up in 2016. Because of the extra weight, it will help keep the putter on track and accurate, which appeals to golfers of all skill levels.

Odyssey offers two versions — one with a belly-putter grip and one with a standard grip.

For me, the price point seems to be spot on and is always a much cheaper option than the Scotty Cameron’s. The selling points also include the heavier head (400 grams) and shaft (150 grams), which will allow you to have more of a pendulum-like feel and stability to your putting stroke.

The look of the Odyssey Tank Versa #7 Black Putter is what I thought was its best feature. The shape of the clubhead combined with the black and white contrasting colors made lining up putts very easy. The clubhead alone simply told me I had the putter face aimed to the right (something I didn’t realize with other putters).

I loved how this putter felt in my hands. The combination of its ability to get square to the putting line, along with the added weight, felt like the putter was always on line. I thought the feel was very similar to the Titlist Scotty Cameron Futura X (and at half the price) and had a better sound and feel than the TaylorMade Daddy Long Legs.

I think the club definitely lives up to what the company was trying to accomplish with its Odyssey Tank Versa #7 Black Putter. Thankfully, I never did end up going with the belly putter because it never felt comfortable for me. The Odyssey Tank Versa #7 Black Putter‘s counter-balancing felt much better for me, and I think will be a great alternative for those who need to stop anchoring their stroke in two years.

Again, I really like the counter-balancing idea, and I think this is only the beginning of this technology.

I actually put the Odyssey Tank Versa #7 Black Putter in my own bag.

I purchased the 38-inch model with the belly-putter grip. I attempted to purchase a shorter version, but was told that if I wanted the belly-putter grip that the shortest version was 38 inches. Unfortunately, because I’m 5-foot 9-inches tall and tend to hunch over a little bit when I putt, in order for me to get my eyes over the ball the putter grip ended up catching on my shirt.

But my dad, who is a couple inches taller, is going to love this as as Father’s Day gift!

I think the club will sell very well this season, and will only go up in sales as we get closer and closer to the anchoring ban — and people see their playing partners rolling birdie putts in with an Odyssey.

On an overall scale, I’d give it a 8. I wasn’t a big fan of the feel of the counterbalance when combined with the standard grip, and I couldn’t get a putter shorter than 38 inches with the belly-putter grip. Other than that, the look, feel, ability to align are all there, which are the necessary things you’re looking for in a putter.