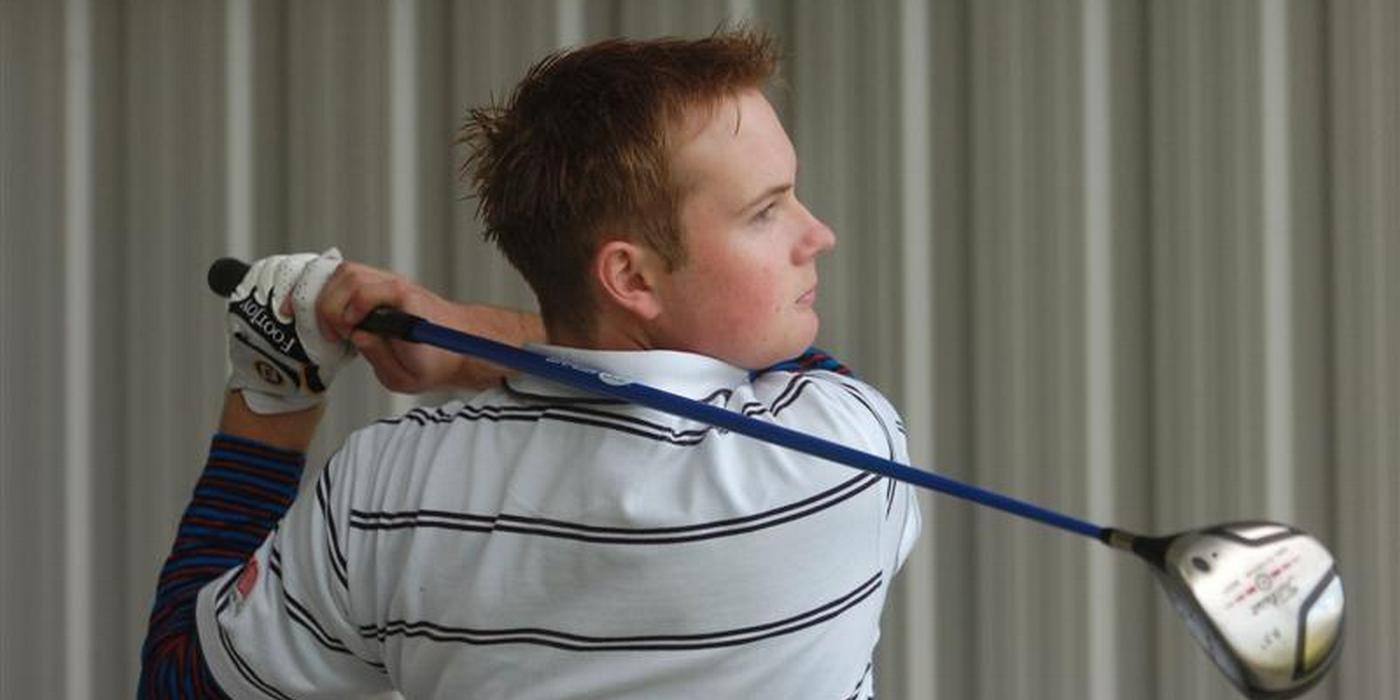 Yesterday (April 27, 2014), I made big steps by finally finishing off a great round. Over the past few weeks, I have been hitting the ball really solid, but just had not been getting anything out of my round. Maybe my longer-than-expected form is due to lack of competition rounds coming out of the long Minnesota winter or having to alter my schedule around due to mini-tours and players struggling to compete. Regardless, that all changed on a recent Monday in Midland, Texas.

I qualified, finally, from the NGA Tour up to a Web.com Tour event.

I didn’t make the top-25, so I wasn’t set the following week at the South Georgia Classic presented by First State Bank and Trust Company at Kinderlou Forest Golf Club in Valdosta, Ga. And flights were booked and I didn’t have enough time to drive the 21 hours from Texas to Georgia to play-in again.

I’m not whining… It was a huge thrill.

Aspiring PGA pro and NGA player Thomas Campbell makes a Monday qualifier for the Web.com Tour. 2nd Swing Golf Blog is with him.

I’ve been trying for some time now this season to make the PGA Tour, but to jump up from the NGA, where I am now, I took a stab at another Monday qualifier tournament for the Web.com Tour with  WNB Golf Classic at the Midland Country Club. The Web.com Tour is just below the PGA and the purses are larger, of course. The Monday qualifiers are opportunities for player like me to take it to the next level.

Play in Midland eventually was suspended for good on Sunday due to hard rains. Andrew Putnam, 25, of Tacoma, Wash., won with eight-under par and a round left to play. But I had made it to the final day on Web.com and was in the mix tied for 70th at one-under par with that full round left. I eventually had scores of 73, 70 and 72 for the first three rounds.

First things first, though, here’s how I got to play for the rest of the week on the Web.com Tour:

My locker at the Midland Open, a Monday qualifier for the Web.com Tour, which is a step below the PGA and a step above me now.

Starting on the 10th hole (which actually was my first hole of the day) one of the most difficult on the course I hit a great drive. Then, I hit an iron shot that never left the flag to set up a six-foot birdie putt, which I rolled in. I then hit another great iron shot on the next hole, a par-3 down the hill. It went dead straight at the hole, and again I came up 10 feet short.

I read the putt correctly but just didn’t quite trust my read, and the ball slid past the edge of the hole. I then made bogey on the 12th hole from the middle of the fairway with a 9-iron in my hands after a sloppy approach shot and chip.

I came back nicely, though, making a two-putt birdie on the par-5 13th. From the middle of the fairway on the next hole, I made another sloppy bogey with a 9-iron in my hands again, but one more time, I bounced back with a great iron shot on an island par-3 to make another bounce-back birdie. This was starting to get a little ridiculous.

I was making those sloppy bogies when I should had been looking at realistic birdies. It was starting to get to me. I was not about to let this round slip away.

I made a par-5 on the 16th hole. Another putt that I read correctly and didn’t quite trust slipped passed the edge of the hole. Not letting that disappoint me was a struggle, knowing that if I was to qualify I can’t afford to make pars. Then I reminded myself that I’m one-under through seven and that I’m capable of making a lot of birdies coming in to give myself a chance.

And that started right on the next hole. I hit a great 8-iron shot to a difficult pin location. I couldn’t see the ball on the green since it was elevated, but I knew it had to be good. The ball ended up a foot past the hole. It could have easily gone in!

Aspiring PGA pro of Minneapolis, Thomas Campbell’s Web.com Tour pass. He’s on the NGA now, a step below but made a Monday qualifier round for the first time recently.

Feeling confident with my game, I hit two good shots to be 10 feet away from the hole for birdie. At this time, I could see storm clouds rolling in and heard a bit of thunder while walking to the green. I was hoping that it would avoid us as we had an afternoon tee time and wanted to get finished today.

My birdie attempt was once again well read, except I did not get the speed right. I hit it five feet past the hole through the break and proceeded to miss my par putt, with the ball taking a very dirty lip out. I couldn’t believe it after playing so well that I was only one-under though nine holes.

I had made four birdies, three bogies and two pars.

I had two choices: get over it now; or get frustrated. If there was ever a good time to have a weather delay, now was the time. As I was walking to the 1st hole (our 10th), the horn went off to suspend play. We ended up under a weather delay for a little over an hour. Clearly, enough time for me to get over that nine and start fresh.

A bit of a weather delay didn’t stop PGA hopeful Thomas Campbell from qualifying up to the Web.com Tour in Texas late last month.

Something happened during that rain delay, and I still don’t know exactly what, but as we played the second nine — I was a new person. I did have a number in my mind.

Having an hour of time to kill allowed me to take a look at the leaderboard, and I don’t usually watch the leaderboard. But I couldn’t help it with all the time I had to hang around it. I saw there were four 66’s in from the morning field. So I immediately had in my mind that shooting 31 on my second nine would be good enough to get in a playoff to qualify.

During the rain break, I also had the opportunity to talk to my fiancee on the phone. She told me that I’m not allowed to come home tomorrow — so go shoot 31. I got off to the best start I could have asked for after a delay, birdieing the first three holes.

Actually, I could have made an eagle on the 3rd hole, too. I hit a great chip shot that slapped the pin dead center and stopped on the edge of the hole. On my 4th hole, I hit an iron shot that was too much club through the wind. I flushed it, but ended up in a back bunker with straight downhill slop to the hole. I hit a great bunker shot to get the ball 10 feet below the hole and rolled it in to save par.

Finally, a par save!

I parred the following two holes, and then it crossed my mind that I was running out of holes fast. Luckily, I had two holes remaining that I considered realistic birdie holes. I hit it on the green in two on the shortish par-5 but left myself a very fast downhill putt. Let’s just say I had a great two-putt birdie — not the way I planned — but I made birdie.

Then came the shot of the day (I hit a lot today, but considering the circumstances, this was the best.) on the par-3 8th hole, another island green with the pin tucked right on the ridge. In the practice round, I hit it in the water and tried not to let it cross my mind. I then focused as if there was no water on the hole.

I hit it to within three feet and rolled in the birdie putt to get to six-under par. Standing on the final tee, knowing that a par would probably result in a playoff, I really wanted to be sure I got through the qualifier this time around. I hit a great drive and left myself the perfect wedge yardage.

I was having trouble calculating the right yardage in after regrouping. After I figured it all out for certain, I executed the shot just how I imagined, leaving myself a straight eight-foot putt up the hill. The putt went in right in the back of the cup firmer than I would had liked to see it go in, but it went in!

Right at that point I knew that it had to be good enough! It had to be!

A screen shot of Thomas Campbell’s Web.com Tour Monday qualifying score. His first chance to play on the tour above his and below the PGA resulted in a Sunday rainout, but he was invited to the following week’s event in Georgia (Even if he didn’t make the cut, it’s been huge for his young career.).

The walk from the 9th green to the scoring tent was long, and it felt like forever. I was so excited to get that score posted and see if it would be good enough for sure. I had to wait for another hour of groups to finish up just to be certain. Those groups even finished in the dark.

It was a long day on the course but well worth it. I ended up tied with one other player for the low score of the day. But most importantly I qualified for the Web.com Tour event this week!

PGA hopeful and NGA Tour player Thomas Campbell of Minneapolis makes his first Monday qualifier for a tourney below the PGA, the Web.com Tour in Midland, Texas.