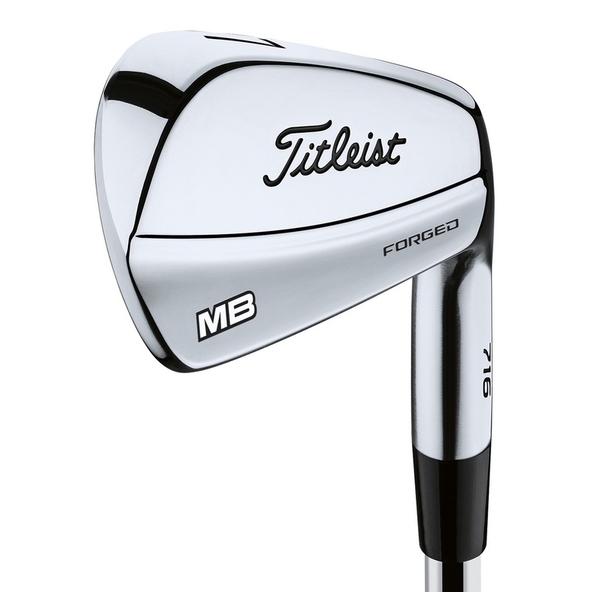 The new Titleist 716 MB version features a higher, more curved muscle back that not only increases the material behind the sweet spot but also gives a fresher, more stylish look than the straight line muscle on the previous MB irons. The high muscle design has a squarer toe, thin topline and pre-worn leading edge for maximum shot control and less dig. This refined blade was designed using a combination of player input and high tech CAD modeling.  Optimized GC progression provides precise tour-proven trajectory through the set. The length of the head is not drastically different to the CB 716 irons, but the real difference is that the CB has perimeter weighting and has the tungsten in the toe, therfore the MB version is not as forgiving, and was designed simply for playabilty.

At address the Titleist 716 MB looks so square with a fresher, more stylish look than the previous MB irons. The toe is also a little squarer to enhance the look at address, which can only be described as compact. This is a very clean looking club and the top line looks nice and thin, exactly what you would expect from a top of the line blade.

I tried out the 716 MB with a KBS Tour S shaft and hit the 7iron. The club had a very soft forged feel.  The ball carried 174 yards, for a total of 181 yards. It’s obvious that the 716 MB wont win any distance contests, however I was provided with a very consistent ball flight. I did find it easy to turn of right to left, workabilty I would expect from a club used to gain control over shot shape. The launch was quite high at 20.9 degrees, and the spin rate was the highest of all the clubs I reviewed. This could be a concern expecailly into the wind for a player struggling to control their trajectory. However the workability that I gained with this club was quite appealing, and the MB should only be used by an elite player who can already control ball flight.

This club is the real deal. If you have never broken par I suggest you look for another club that provides more forgiveness and performance . If you are lucky enough and are an elite amateur or pro the 716 MB could be your next club. Very impressed with the ability to shot control.

6 Iron Set put up to the test by Thomas Cambell